The mailman now brings boxes of wine.  Thanksgiving is coming! 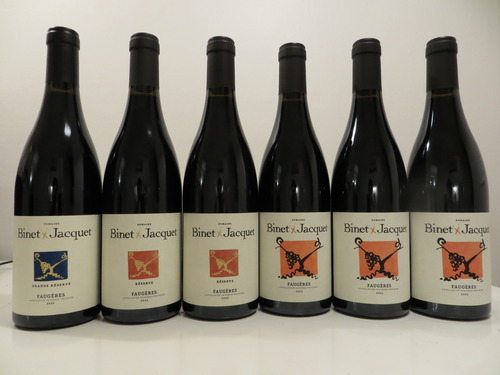 I acquire pumpkins.  Thanksgiving is coming! 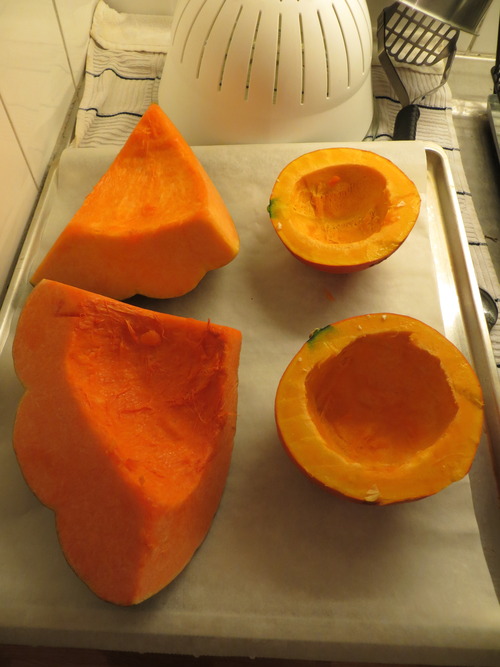 I acquire zebra.  Thanksgiving is coming! 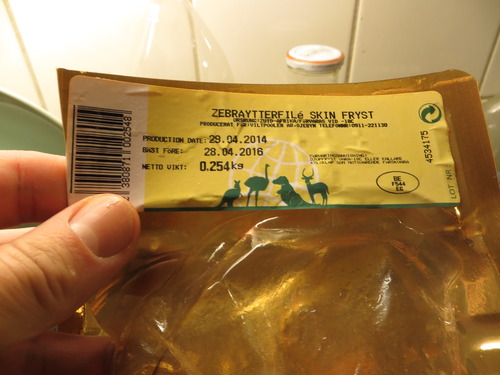 Joakim is the zebra grill master. 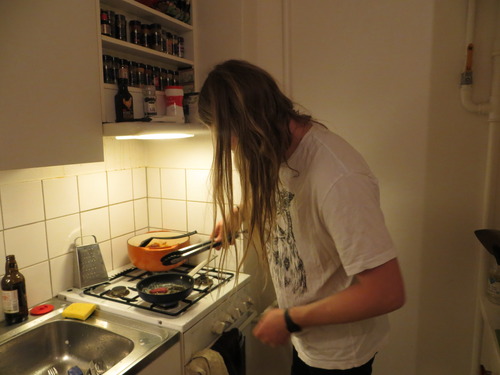 We taste some mini-zebra steaks. 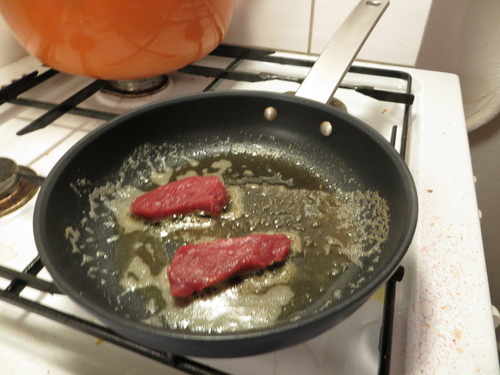 But the bulk of it is reserved for an old-fashioned Thanksgiving zebra chili. 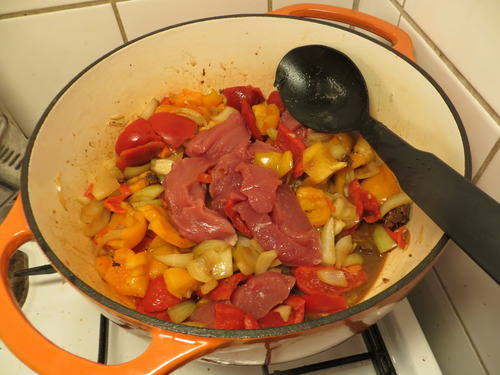 Unfortunately, it is too good and we eat it all immediately. 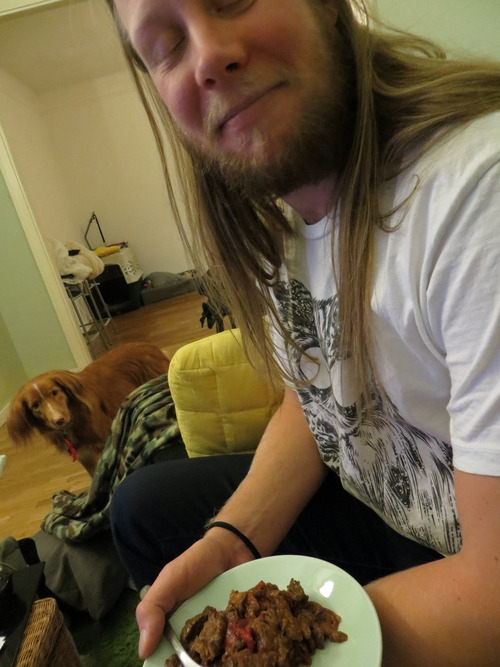 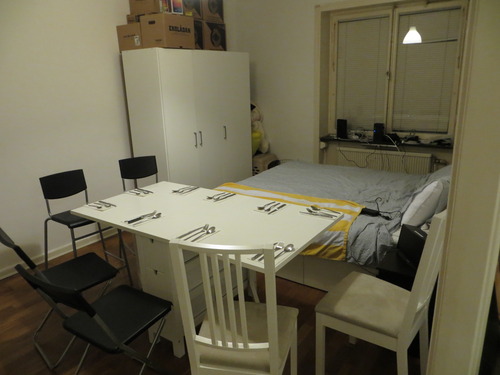 We begin with pre-dinner “mexican mojitos”, with ginger and ghost chili. 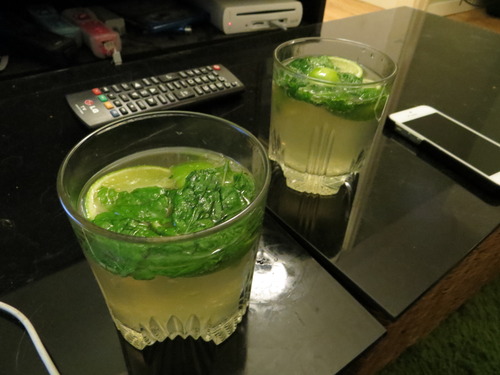 Then people arrive with wine and snacks.  There is traditional Thanksgiving hummus. 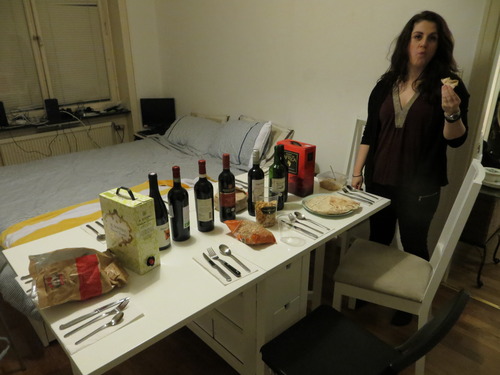 A brief history of traditional Thanksgiving Foods, Part 1: * Whole-roasted dead bird The most common dead bird used by Americans is the turkey. This is because turkeys are absolute twats, and everybody hates them. Cultural traditions dictate that each household should slaughter as many turkeys as possible during the month of November, and line the perimeter of their property with severed turkey heads on sharpened sticks. This is to inform the wild turkey population that they are undesired. Traditionally, the fattest of the turkeys is cooked, whole, and served to the family. This is entirely ritualistic – dining on your enemy’s flesh – and done despite turkeys tasting quite awful. We will likely eat quail, pheasant, cornish game hen, or grouse instead. All of these birds are smaller and taste better, but we can still pay homage to the bird-slaughtering tradition passed down by our pilgrim ancestors. 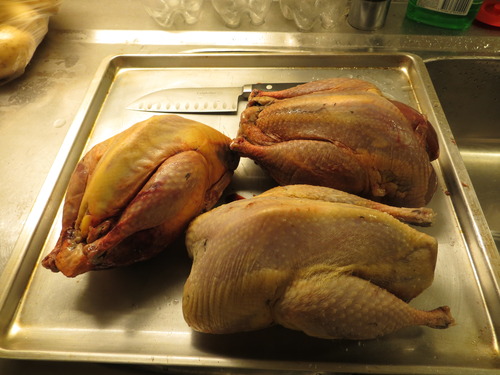 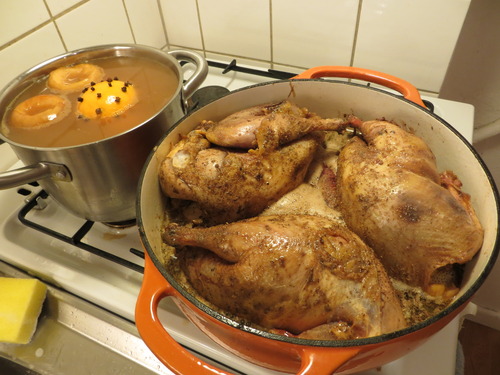 A brief history of traditional Thanksgiving Foods, Part 2: * “Stuffing” “Stuffing” is the name given to small chunks of stale bread that are jammed inside the stomach cavity of the turkey as it roasts. This is done to absorb all of the delicious meat juices, thus simultaneously achieving both soggy stale bread chunks and a dry, tasteless meat. Since nobody actually likes soggy stale bread chunks, modern generations have grown fond of vegetable additions to the stuffing. They primarily use vegetables that nobody likes, such as celery. This adds crunchy, watery tastelessness to the soggy bread chunks. Sometimes “stuffing” is called “dressing” for entirely unknown reasons.

A brief history of traditional Thanksgiving Foods, Part 3: * Wine This is a fermented grape-based beverage that originated in the middle east in at least 6000 BC. It is served during Thanksgiving because its ethanol content increases one’s appetite, makes one less likely to complain about the overall low quality of the meal, and encourages seldom-seen distant relatives to engage in terribly inappropriate conversation and, occasionally, physical violence. This is not optional.

A brief history of traditional Thanksgiving Foods, Part 4: * Sweet potato souffle Faced with a huge abundance of sweet potatoes, the European settlers who inhabited the Massachusetts cape area during the 17th century realized they would be an excellent way to feed large quantities of Native Americans at a feast without the small village spending a damn fortune at the grocery store. Since the pilgrims were already fully Americanized, they added a shitload of butter, more sugar, and topped the whole thing with marshmallows. The pilgrims in charge of preparing this dish usually transported themselves by electric scooter since their legs were no longer capable of supporting their weight.

A brief history of traditional Thanksgiving Foods, Part 5: * Mashed potatoes Multiple peer-reviewed journal publications have shown mashed potatoes to be the best food ever produced by mankind. This is why they are present at every feast, Thanksgiving included. The pilgrims had not yet discovered local potatoes because they grow underground and are hard to find without well-trained potato dogs. Instead, they were importing their potatoes from Peru. They ate exclusively Peruvian Purple Potatoes, which rendered their mashed potatoes… purple. Most Americans continue this tradition to this day, despite the widespread availability of normal brown potatoes from Idaho. We, however, will use Swedish potatoes because I can’t find any purple potatoes here. 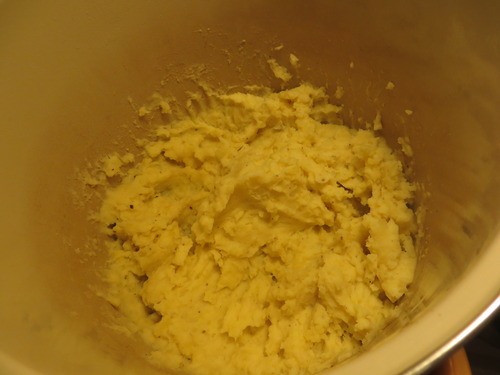 A brief history of traditional Thanksgiving Foods, Part 6: * Green bean casserole In 1955, the Campbell Soup Company noticed that their Cream of Mushroom Soup was selling poorly. This is because Cream of Mushroom soup is a disgusting cylinder of salty white glop with little resemblance in appearance or flavor to anything related to mushrooms. Teaming up with Corning Glass Works, America’s number one producer of glass bakingware, Campbell Soup devised a brilliant plan to trick the American public into eating their crappy mushroom soup. They devised a recipe in which they poured soup on green beans and heated it for a few minutes until it was a warm green bean slop, and then set to work on hoodwinking the populace. Through a massive campaign of radio, newspaper, and television adverts, Campbell Soup managed to convince every single citizen of The Land of the Free that “green bean casserole” was an ancient American tradition, even consumed readily by Jesus when he had teleported from the Middle East to Missouri in the 1st century AD. We continue to eat it every year because we don’t want to let Jesus down.

A brief history of traditional Thanksgiving Foods, Part 7: * Cranberry relish The pilgrims really loved cranberries, and thought they were both a nice autumnal flavor and an excellent companion to the repulsive meat of the turkey. Unfortunately for the pilgrims, Ocean Spray was not founded until 1930, so they did not know how to get cranberries. Instead they filled tin cans with high-fructose corn syrup, red food coloring, and gelatin. Once the gelatin had set in the shape of the can, they would open it and squeeze a jiggly, red cylinder of sugar on to a plate and pronounce it “cranberry relish.” Although nobody liked it, it delighted the youth and, thus, became a permanent fixture in the yearly feast.

A brief history of traditional Thanksgiving Foods, Part 8: * Zebra chili The pilgrims, shortly after their arrival in the Cape, were rapidly losing their muscle tone due to a deficiency of protein in their diets. The Native Americans, upon noticing the dwindling size of the pilgrims’ biceps, taught them how to hunt wild Zebra. The Zebra population was quite small, and restricted to one small region of the Cape Cod coastline. These were the now-extinct aquatic North American Red Zebra. Unfortunately, by 1668, they were hunted to extinction. Recently, in the late 90s, scientists were able to clone the North American Red Zebra from a sample of well-preserved DNA. Today there are three Red Zebra farms operating in Massachusetts that supply the world again with Thanksgiving Zebra meat. Zebra is traditionally served in a slow-cooked chili, as was done by the pilgrims at the first Thanksgiving. The recipe for chili had been discovered and brought back to Europe by Christopher Columbus during his fourth voyage to the Americas in 1504. His scouts had traveled through Mexico to the southern Texas region where natives taught them to survive on chili, smoked brisket, and pulled pork.

Chili part 2.  This time without zebra. 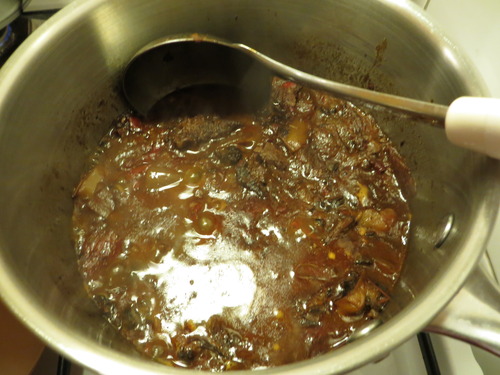 A brief history of traditional Thanksgiving Foods, Part 9: * Camel stew Camel stew was introduced to the Thanksgiving feast in the mid-1800s, during a period of Christianization of the holiday. Church officials, wanting to remind Americans that America was One Nation Under God, sought to introduce some “middle easterny” flavors into the spread. It was noted that Jesus often hung out with camels, and after a closed-door voting session it was announced that camel stew would be mandatory at all Christian’s Thanksgiving tables. The punishment for its absence would be an eternity of damnation.

Camel stew was skipped this year.  Not enough camel meat.

A brief history of traditional Thanksgiving Foods, Part 10: * Pumpkin pie Thanksgiving, as you are well aware, comes a few weeks after Halloween. All of those jack-o-lantern pumpkins that we use for Halloween, the obviously superior holiday, come from somewhere… pumpkin farms. Ever since the time of the pilgrims, pumpkin farms have been over-planting for Halloween. Time and time again, the demand for jack-o-lanterns does not exceed the supply, and pumpkin farmers are left with fields full of unused pumpkins. Just prior to the first Thanksgiving in 1621, the pilgrims discovered that the remaining unpicked pumpkins eventually caved in on themselves, forming a hard lower crust with a sweet, creamy, lightly pumkin-flavored inner filling. These were picked and served at the feast, and surprisingly heralded as one of the greatest highlights of the evening. The tradition has continued uninterrupted since that first feast. Right about now the pumpkin farmers are out picking the freshest pumpkin pies from their pumpkin patches, and soon they will be making their way to our tables. 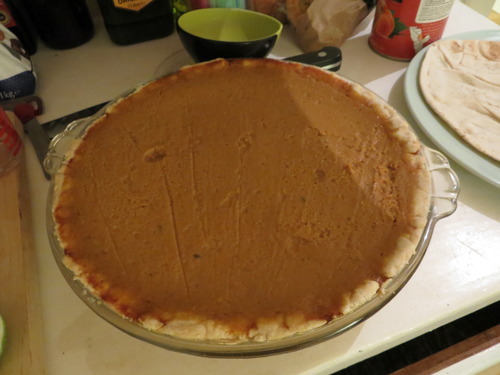 A brief history of traditional Thanksgiving Foods, Part 11: * Wassail Wassail is a hot English cider that can be combined quite excellently with alcohol. It entered the Thanksgiving tradition by way of Boston in 1774. In December of 1773, the Bostonites ran amuck throwing British tea into the Boston harbor because the red coats were a bunch of total tossers. Approximately 6 hours later, however, the citizens of Boston realized that December is cold, tea is good, and they no longer had any. So they made wassail, which they still remembered how to do because they were basically British, and they added rum to it to help them forget about those English tossers and their damned tea taxes. It was incorporated into Thanksgiving in Boston that very year, and spread quickly throughout the nation because everybody likes warm drinks with alcohol. 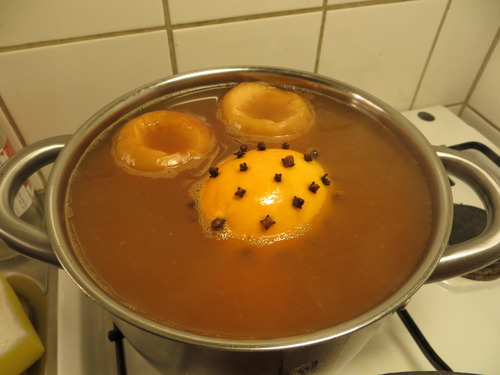 A brief history of traditional Thanksgiving Foods, Part 12: * Glögg I don’t even know what this is, and nobody drinks it in America because it’s clearly communist.

The feast begins.  "What the hell is this?  And this?  Are those MARSHMALLOWS ?“ 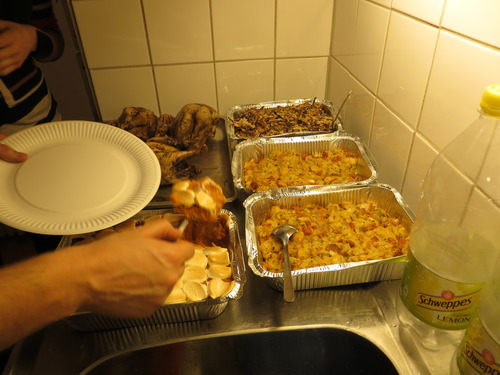 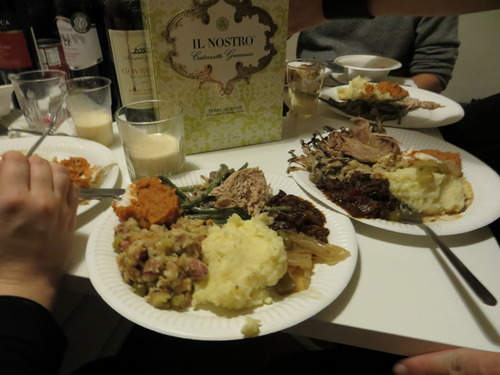 Eggnog is attempted by all, but not terribly popular. 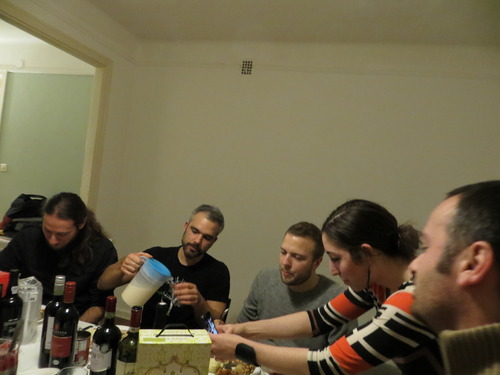 Everyone is slightly confused. 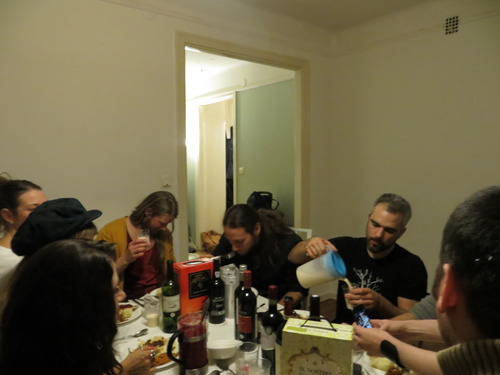 Then everyone is painfully full.  Except the dog, who wants more pheasant. 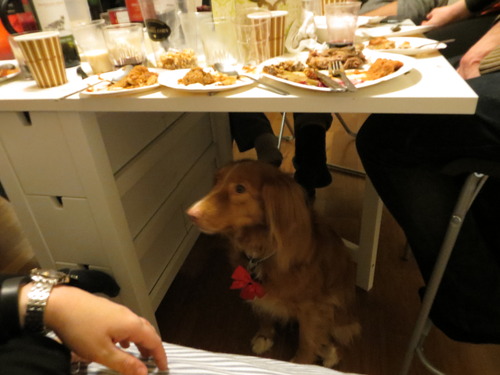 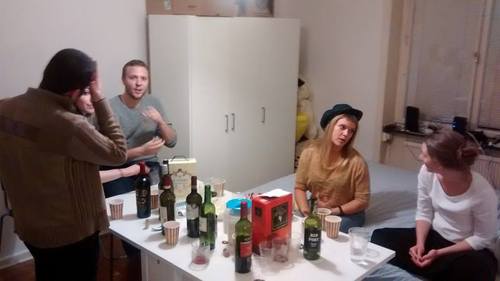 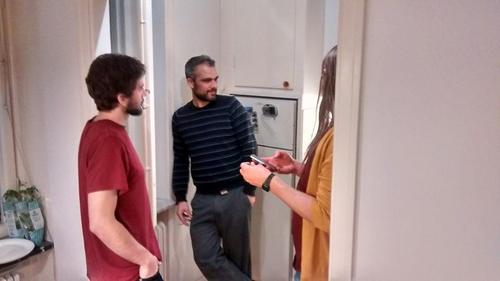 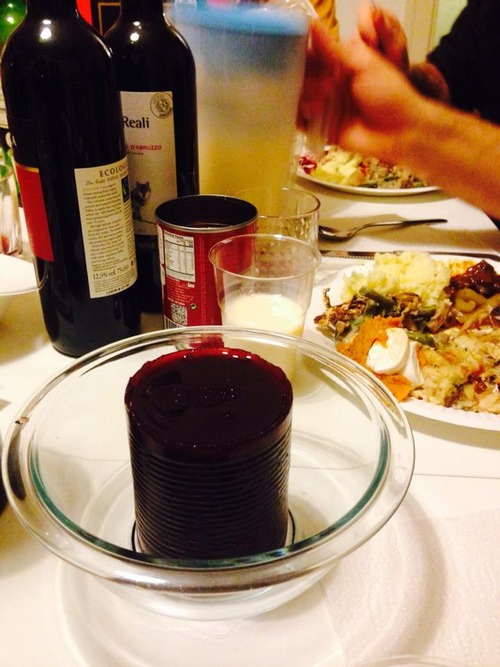 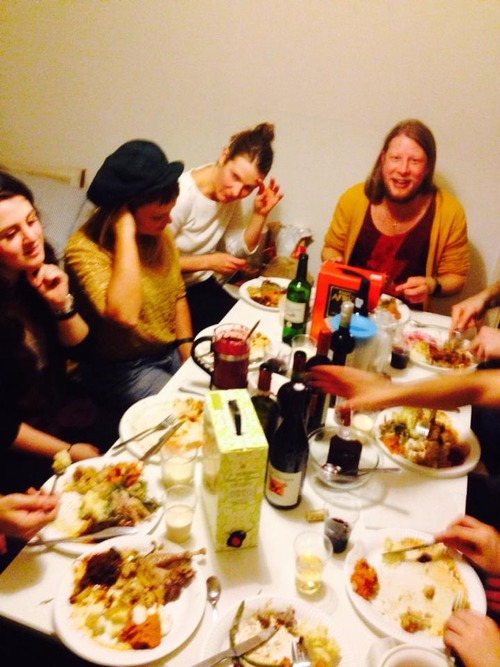 I have 10 days of leftovers and three pheasant carcasses to deal with.